In this tutorial we will look at the finishing touches to the scene prior to final render. VRayEnvironmentFog is used in all of our scenes to some extent even if only very subtly.  The atmosphere in reality is not pure and perfect so there is always a certain amount of dust or fog in the air reducing visibility at a distance.  Even if apparently imperceptible, these effects give depth and realism to all scenes.  At the other end of the spectrum, fog can be used to create some dramatic effects when used in conjunction with lighting and lens effects which were previously only achievable in post production. 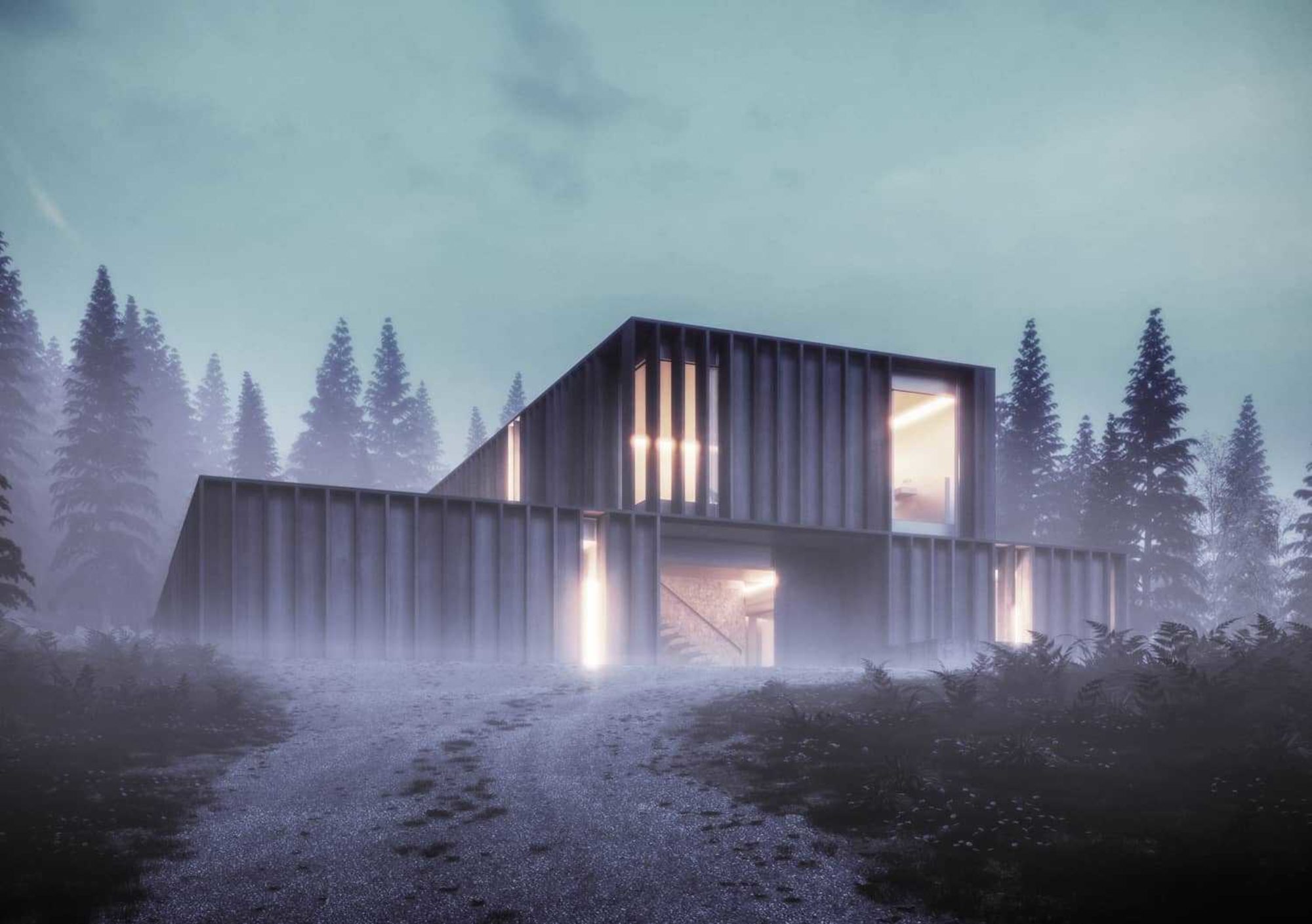 VrayEnvironmentFog settings are found under the Environment tab of the Environment and Effects window (8 - keyboard shortcut).  We started in this scene by adding a general fog set to 30m height which extends just above the tops of the trees. This is set to 100m fog distance which just gives a subtle depth to the image without making it too foggy as it were.

The fog colour in this case is completely white rather than the 217 default.  GI Scattering is turned off.  Sometimes this can produce a nice effect and is of course more physically accurate but it increases render times massively and can certainly be done without for most scenes. The default subdivs are set to 8 but having played around with these values I usually set them to 300 as it seems to be the optimum value for general fog in an external scene combining detail with speed of rendering.  Some tweaking of this for different scenes may be necessary but 300 seems to be the sweet spot.  In theory this parameter determines the number of points inside the fog at which volumetric light is evaluated meaning lower subdivs should be noisier but quicker to render.  From extensive testing we have found that this is not always the case and that sometimes higher subdivs can actually speed up the render.  Bear in mind that we use the universal method for our render settings so this may be different with different render settings.

In Ray Filter settings the affect shadows and affect GI are both unchecked.  This allows for a greater amount of fog without having to alter your camera settings too much to compensate from the lower light levels as a consequence of the fog.  There appears to be little difference to the overall appearance of the fog in the scene. 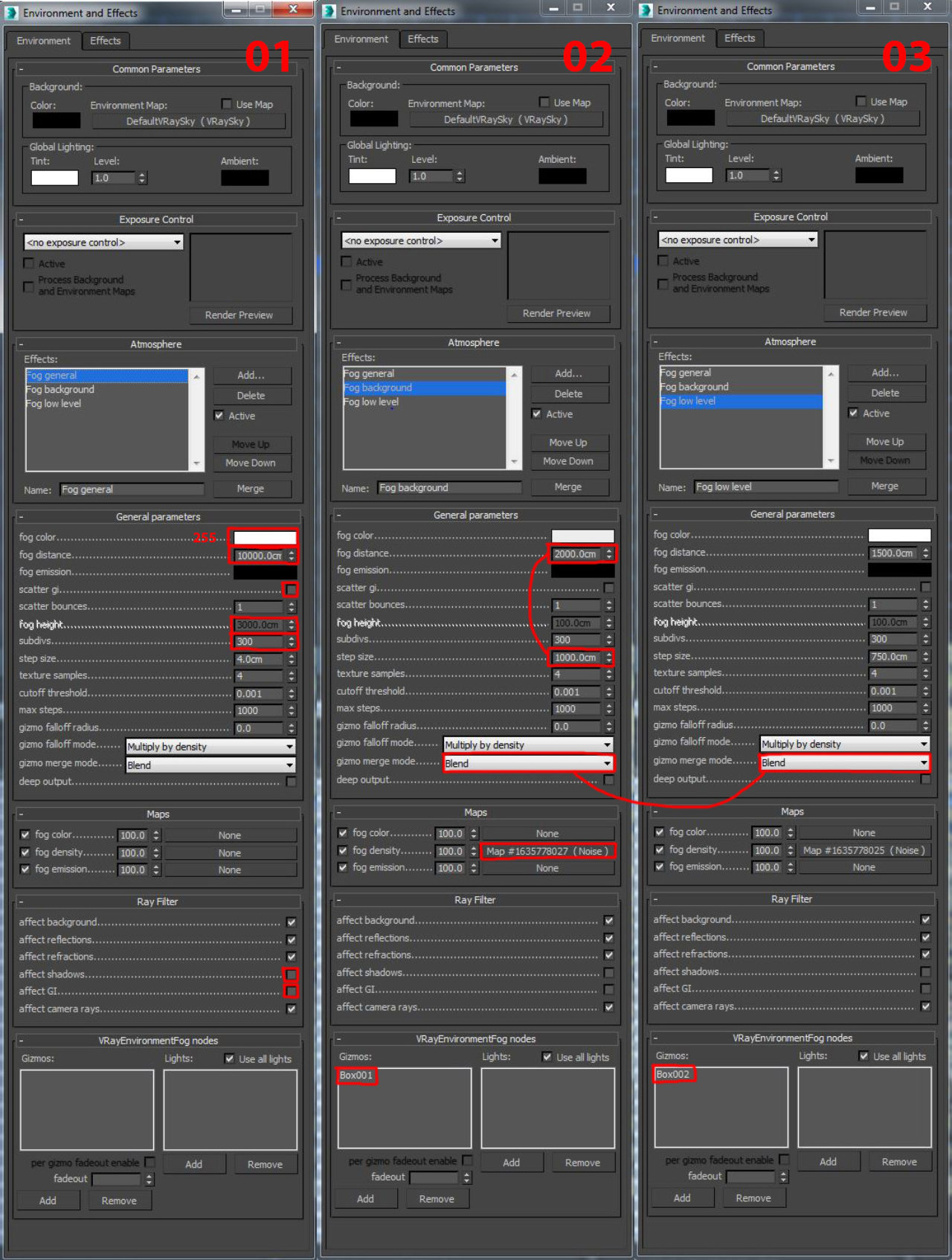 The second and third fog effects are used to produce additional fog in specific areas, in this case, more in the trees behind the building and some low fog in the foreground.  A simple box is used as a gizmo in the VrayEnvironmentFog nodes section.  This means that this fog will be confined to the gizmo area.  If using a box as a gizmo make sure it is un-renderable in object properties.

When distributing local areas of fog in a gizmo we quite often add a basic noise map in the density slot to create some unevenness in the fog distribution. This is particularly effective amongst trees or ground cover giving the impression light air movement blowing the fog around.  Step size is important when using maps for colour density of emission.  The sampler used in this instance is known as a raymarching sampler which steps through the volume evaluating volumetric textures and lighting. Generally step size should be two to three times smaller than fog distance to work well.  We typically use half the size a rule of thumb.

Make sure that if you have multiple gizmos that the gizmo merge mode is set to blend otherwise you can get unwanted interactions and noise between them.  Sometimes if the gizmo is complex geometry rather than a simple box you can get these unwanted effects as well. 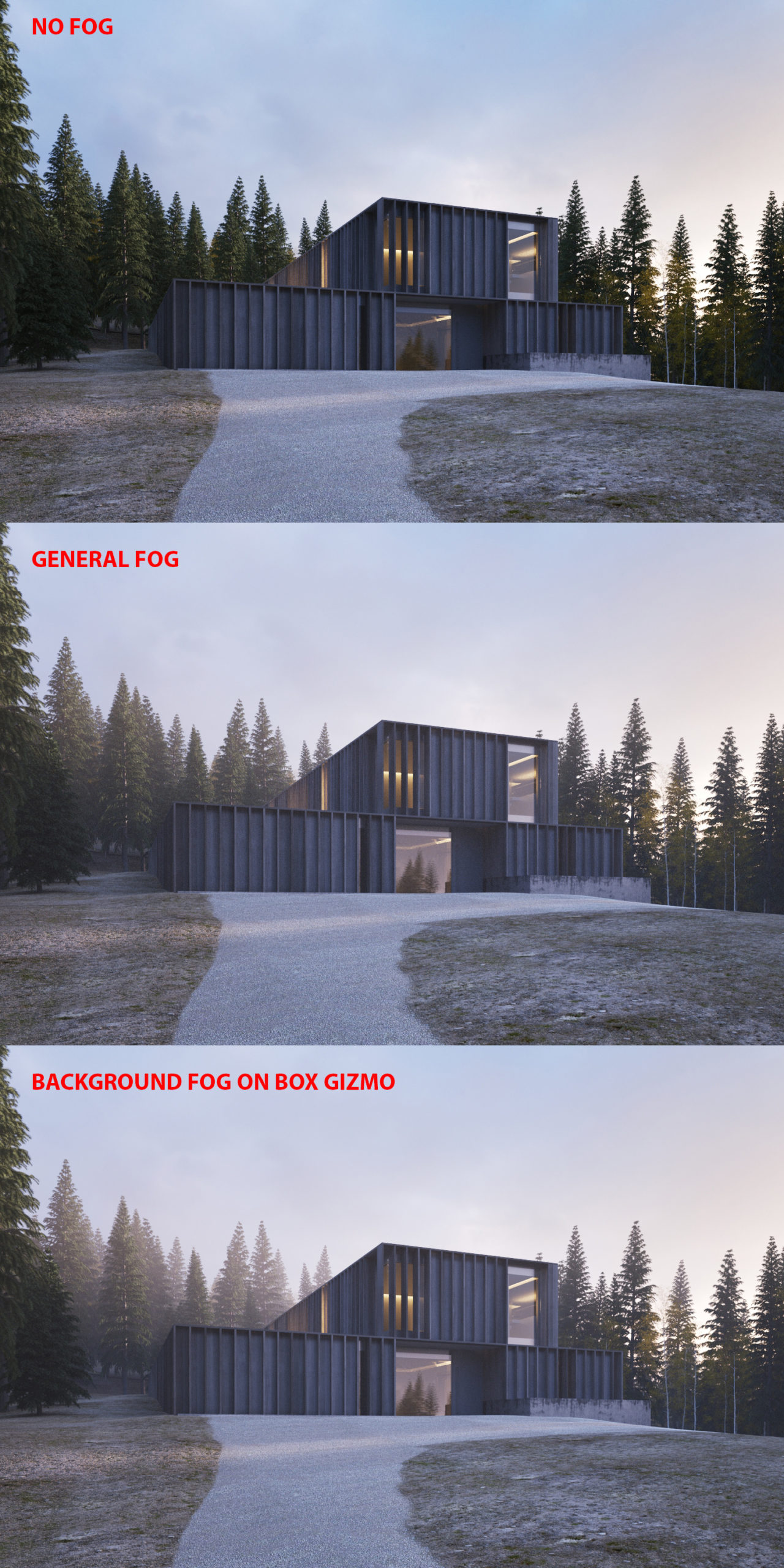 You can of course also have the VrayEnvironmentFog as a render element under VrayAtmosphere in render elements in case your computer is not powerful enough to render it into the scene or you would rather have a quicker result and comp it in post. 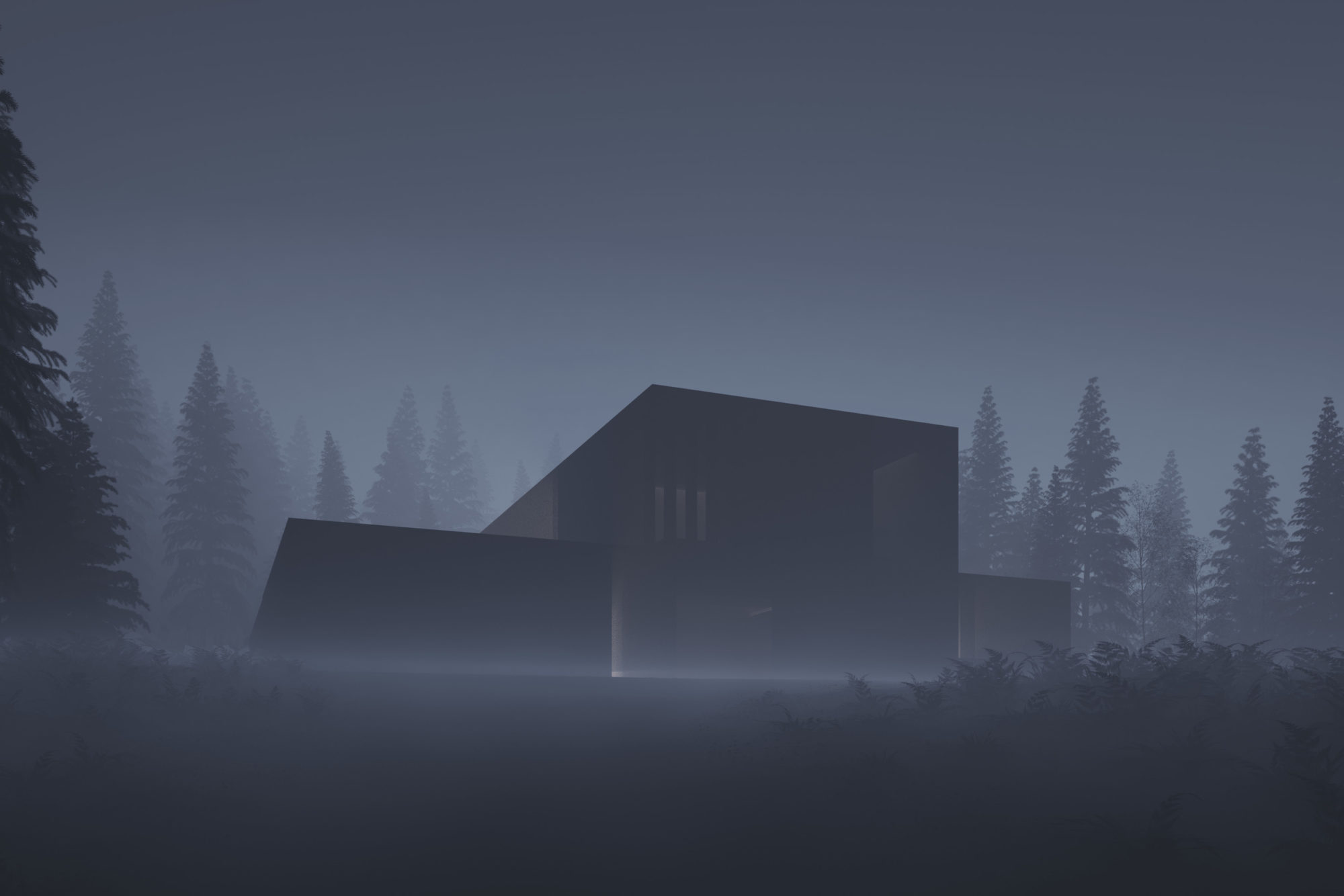 As mentioned previously lots of different effects can be created using VrayEnvironmentFog.  In the example below of the original Carey House scene a fog gizmo was placed in front of the car head lamps which were made in the same way as the courtyard tree light illustrated in the last tutorial on internal lighting.  Add lens effects of course and there you go, straight out of the frame buffer with no post. 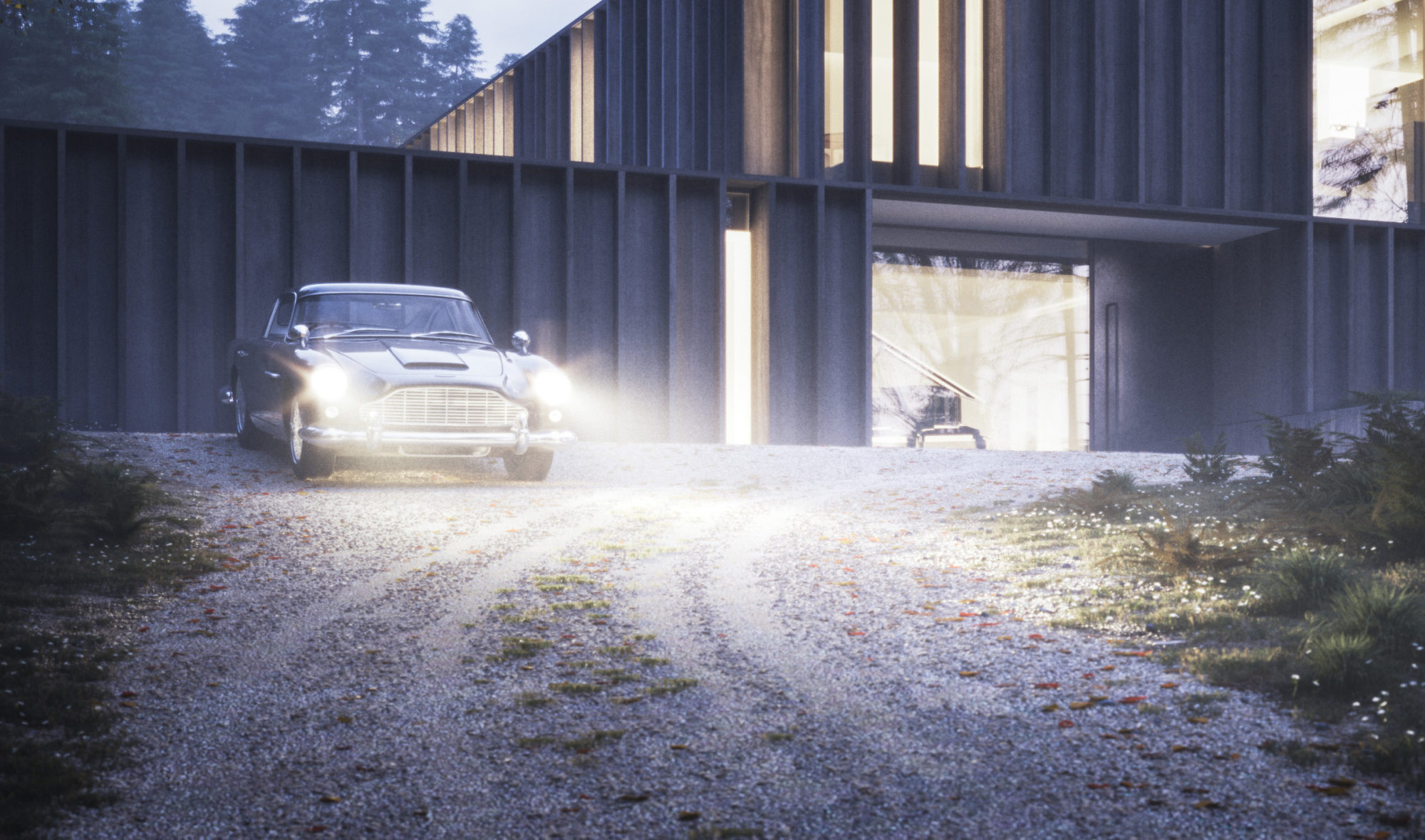 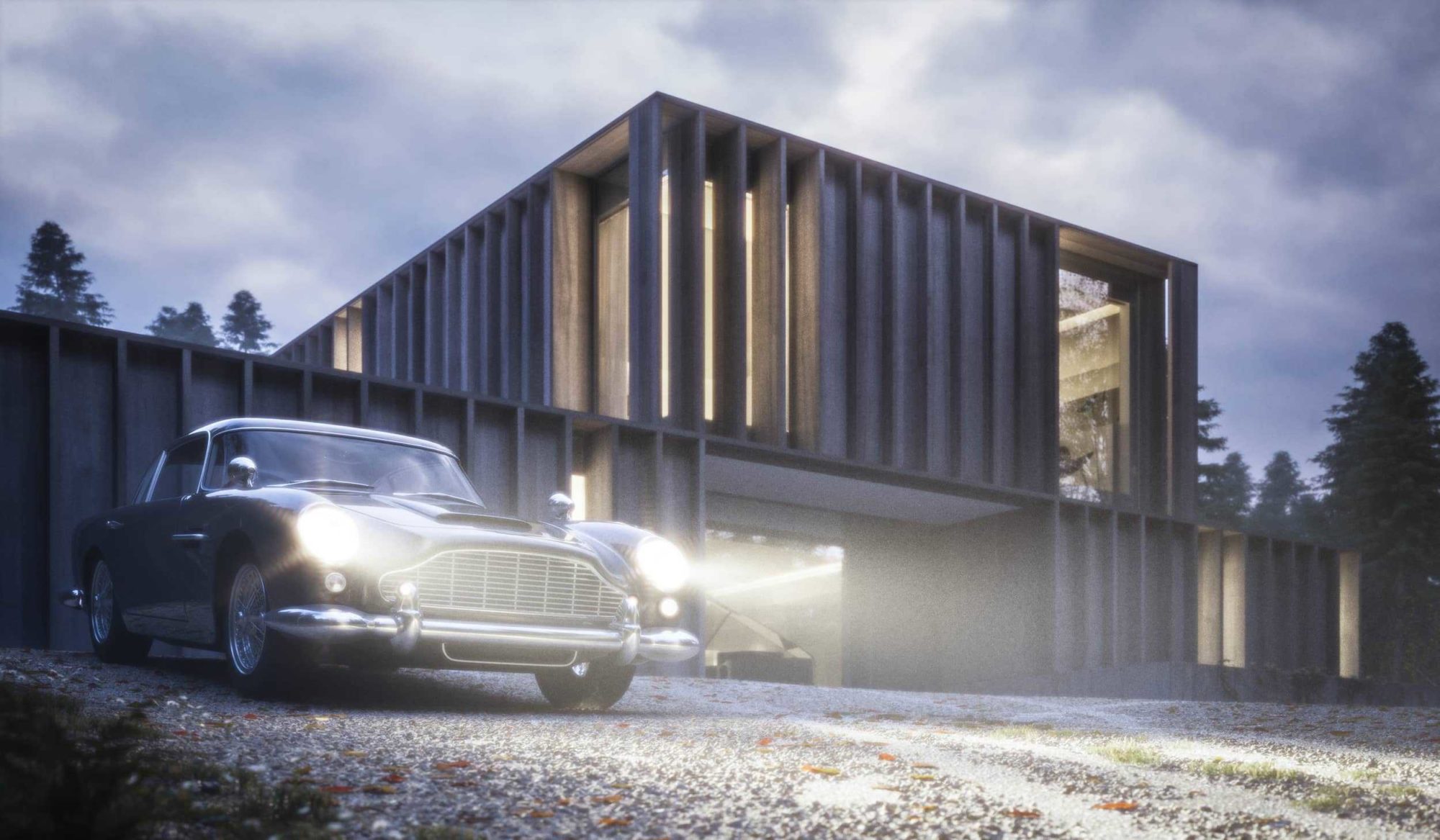 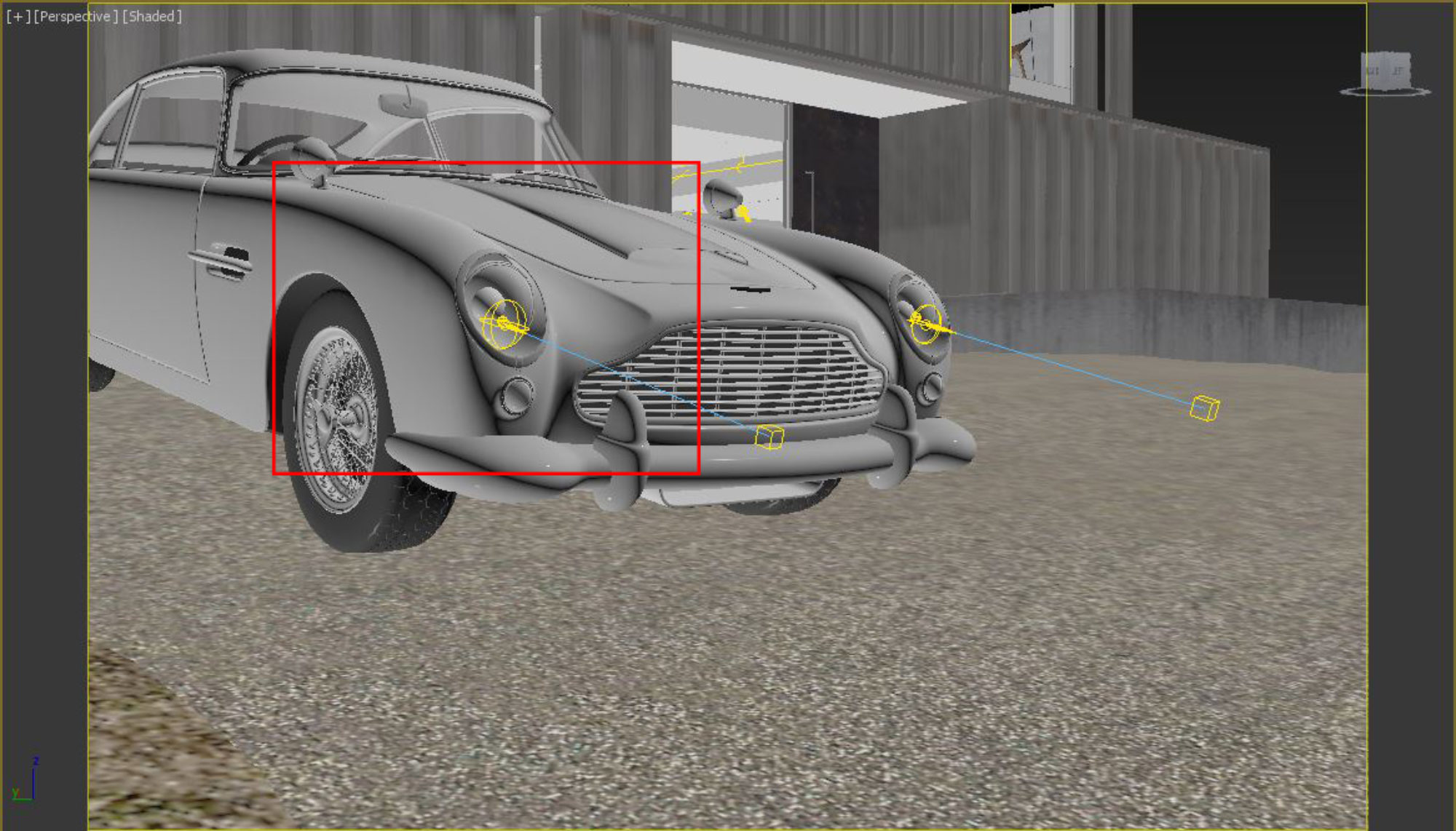 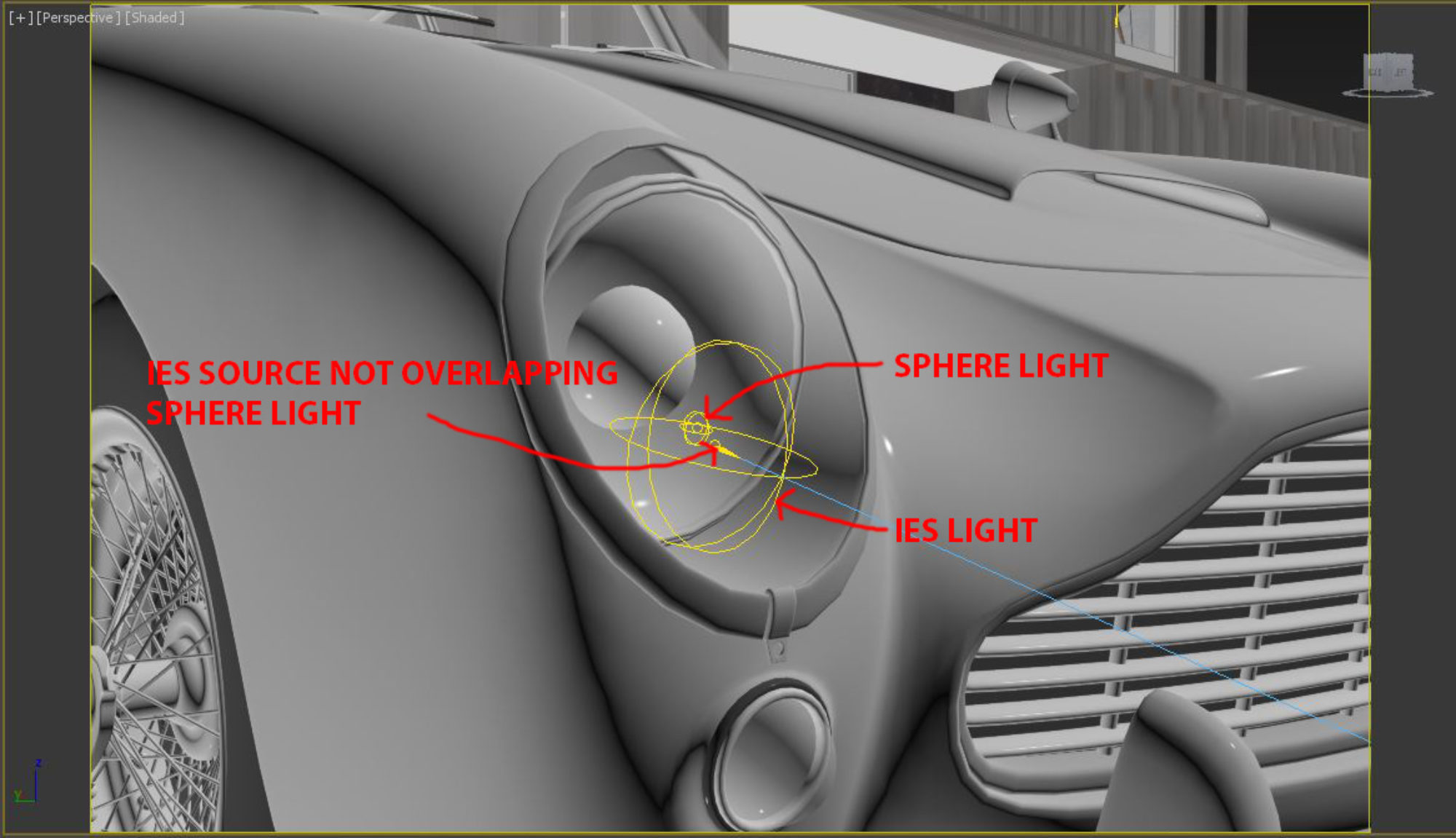 The next tutorial will be the final one in the Carey House series where we look at render settings and basic post production techniques to produce the final images.